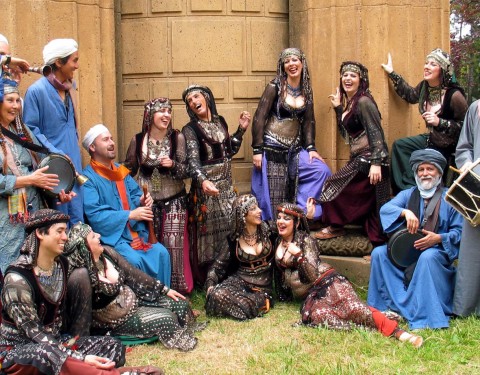 Hahbi ‘Ru has been dancing together since 1991…

Hahbi ‘Ru Dance Ensemble Hahbi’Ru: an early term for the Bedouin tribes who wandered the Arabian deserts enriching themselves by taking what they pleased from the many countries they traversed. Like these Bedouins, the Hahbi’Ru Dance Ensemble’s performance style has been influenced by the folkloric dances and music of many regions of North Africa and the Middle East.

John Compton and Rita Alderucci, the CO-directors of Hahbi’Ru Dance Ensemble, were students of Jamila Salimpour, founder and director of the Bal-Anat Troupe. Jamila’s Bal-Anat was the first to bring the tribal performance style to the American Public in the late 1960’s and 1970’s. Both John and Rita appeared as soloists in Bal-Anat during these years.

In 1991, John and Rita reunited and brought together the group of seasoned dancers and musicians that became Hahbi’Ru, including Paula Oxman, Hahbi’Ru’s costume designer. Their goal was to recreate the tribal ensemble style of performance begun by Jamila Salimpour, and to utilize the skills they acquired over the last 30 years as professional entertainers. Under their direction, the group built a repertoire based on Arabian folkloric music, dances, songs, and customs. These traditional dances have been fused with modern day technique and performance skills thereby creating a style which is unique to Hahbi’Ru.

Hahbi’Ru captures the tribal spirit of a bye-gone era while entertaining audiences with polished performance pieces that combine humor with precision ensemble dancing, and dazzling costumes.