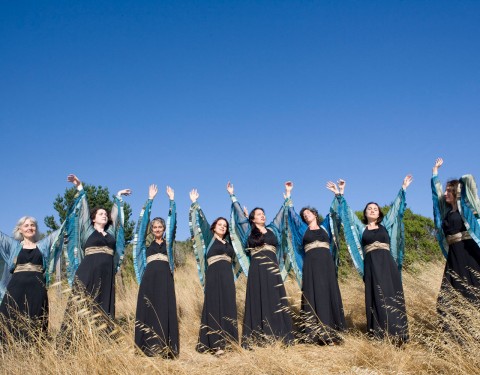 Founded in 1979, Kitka began as a grassroots group of amateur singers from diverse backgrounds who met regularly to share their passion for the stunning dissonances, asymmetric rhythms, intricate ornamentation, lush harmonies, and resonant strength of Eastern European women’s vocal music. Under the direction of Bon Singer from 1981 to 1996, Kitka blossomed into a refined professional ensemble earning international renown for its artistry, versatility, and mastery of the demanding techniques of traditional and contemporary Balkan, Slavic, and Caucasian vocal styling. Under the co-direction of Shira Cion, Juliana Graffagna, and Janet Kutulas since 1997, Kitka has grown to earn recognition from the National Endowment for the Arts, Chorus America, and the American Choral Directors’ Association as one of this country’s premier touring vocal ensembles. In addition, many international musical authorities consider Kitka the foremost interpreter of Balkan and Slavic choral repertoire working in the United States.