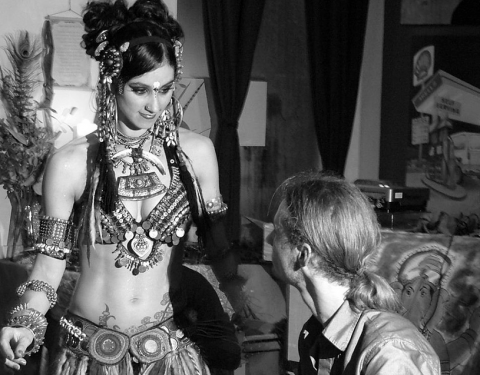 “Rachel Brice first fell in love with belly dance when she saw the famous Hahbi’Ru in the early nineties. When she saw big, gorgeous, proud women with strong carriage and charisma adorned with spectacular antique tribal jewelry, facial tattoos, and rich textiles, it changed the way she saw beauty. She started classes in American Cabaret style right away. In the early 2000s while studying dance in college, she studied American Tribal Style® Belly Dance, African Haitian, Flamenco, Modern Dance, Kathak, and Odissi Classical. At this time she was also in Jill Parker’s Ultra Gypsy, the first Tribal Fusion troupe. She began to be influenced by the various forms she was studying, which influenced her style. She also began to dance with Mardi Love, one of her biggest aesthetic influences. In 2001 she was discovered by rock mogul Miles Copeland and toured for five years with his company, Bellydance Superstars. These tours sparked a global interest in this very San Francisco style of belly dance, known as Tribal Fusion, which has gone on to grow, change and evolve. Today, Rachel studies belly dance with her teachers Carolena Nericcio, creator of American Tribal Style®, and yoga with Gary Kraftsow. Whenever possible, she takes classes with her colleagues. When not teaching on the road, she lives in Portland Oregon where she’s opened a studio, Datura, and has begun a production company, Little Scarab with her partner, Sol Crawford. Together they’ve created a belly dance training program called the 8 Elements™ Approach to Belly Dance. Someday they hope to own a dog and tend a garden.”  -rachelbrice.com